This is a working draft motivated by Kevin M. Kruse’s book White Flight: Atlanta and the Making of Modern Conservatism, Brookings analysis on income inequality, and my birth(place).

It began as a visualization exercise, but I’m slowly working towards something true to the title.

How to read these maps

How diversity varies in the city

I calculated the Multigroup Entropy Index (or Theil Index) for Atlanta in 2017 to quantitatively estimate diversity and neighborhood segregation. The entropy score, which is used in the calculation of the index, is a representation of “diversity” measuring the relative proportions of different groups within a region. It does not consider distribution across or within the region. The higher the number, the more diverse an area.

A Census tract’s entropy score. Similarly, ∏ri represents a racial/ethnic group’s proportion of the population in tract i.

Demographic data for 1990, 2000, and 2010 were taken from the decennial census. Data for 2017 uses population estimates from the 5-year American Community Survey.

Dot distribution maps for the past 30 years

Demographic data for 1990, 2000, and 2010 were taken from the decennial census. Data for 2017 uses population estimates from the 5-year American Community Survey.

Atlanta once championed public school desegregation. In 1961, Mayor Hartsfield told anyone who would listen that Atlanta was the city that was “too busy to hate”. The details of this are chronicled in Kruse’s White Flight mentioned above, but it basically boils down to this: school desegregation and white transfer requests were drivers of white Atlanta withdrawing to the suburbs. Segregationists advocated “to maintain freedom of association,” shaping what Kruse argues is the beginning of a conservative emphasis on negative freedoms that we still see today (i.e. individual preferences at the expense of public equity).

Soon after the Mayor’s coinage, Atlanta saw itself become the city too busy moving to hate. In the 1960s, the white population within the city limits dropped by 60,000. The next decade another 100,000 fled. The following maps show the proportion of black residents in Atlanta and its vicinity. 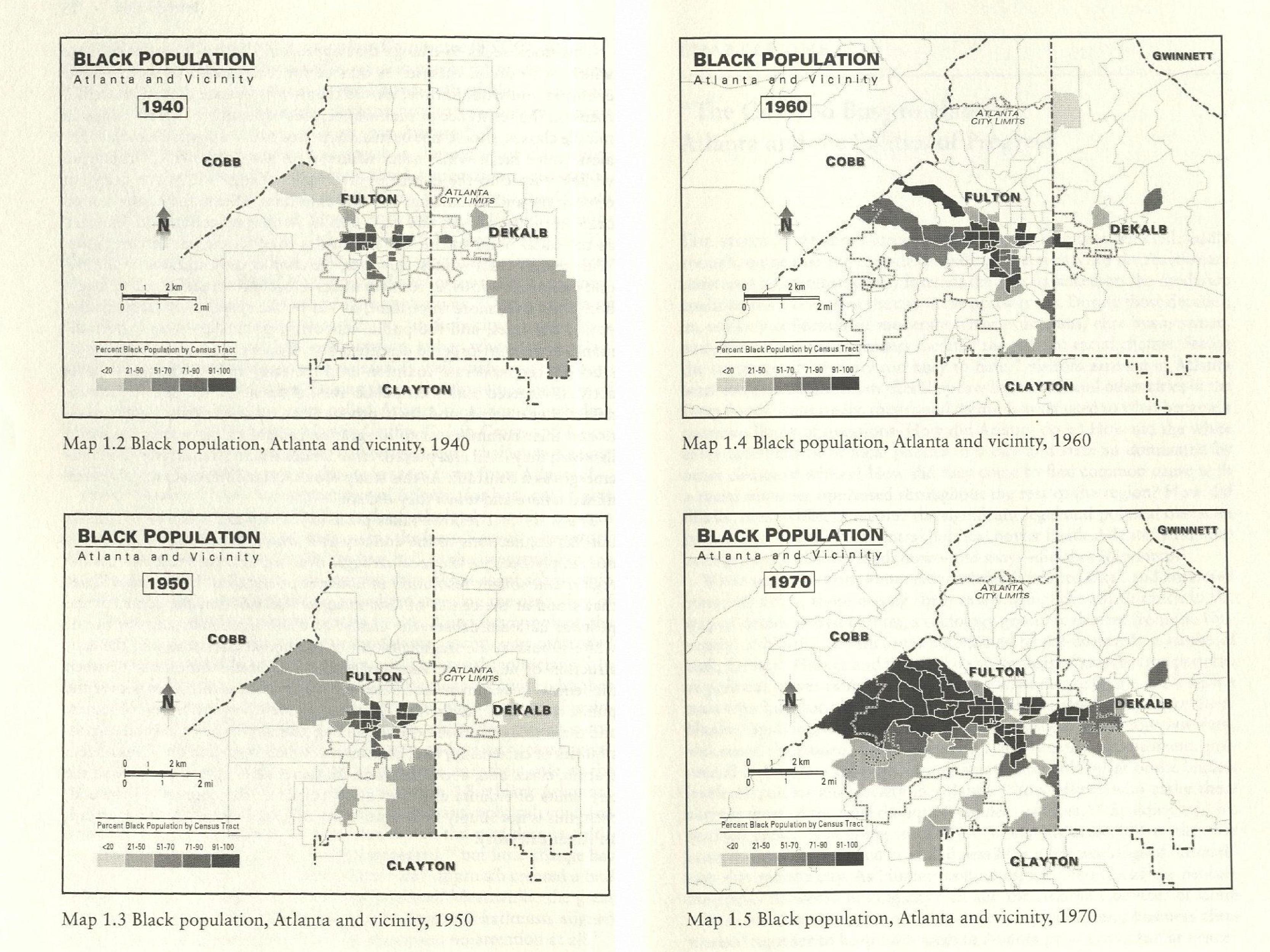 Taken from Kruse’s book. Click here for a bigger version.

Racist housing policy also had a significant role in shaping Atlanta’s current demographic landscape. The roots of this are summarized in the now infamous redlining maps of the Home Owners’ Loan Corporation. It’s interesting to consider this map with 2017 demographics in mind: